I recently dug out a relic from my youth – The Sega Dreamcast. The system is known for being the final blow in the ultimate downfall of Sega, while simultaneously being recognized as rarity ahead of its time.

The Dreamcast promised to “bring the Arcade to your living room”. The problem was, users wanted more than that – they wanted more story driven games with catered experiences for the console player.

The Dreamcast wasn’t the only console going through growing pains. We were on the verge of the new millennium, and Sony, Microsoft, and Nintendo were finally leaving their pre-pubescent states and producing machines like the PS2, XBOX, and Gamecube. These machines were the turning point for a lot of these companies (especially Microsoft) and were the foundation of the video game industry today.

So why bring up the Dreamcast – a failed machine? Because, while the Dreamcast didn’t have the success it deserved, a lot of thought and care was put into the design of the system and how the user interacted with it.

When it comes to the controller, there are two aspects I will point out:

The design of the physical controller

The design of the controller itself was quite unique. It offered both a D-Pad and an analog stick, as well as two triggers on the back. The most original feature was a slot for a (still to this day, one-of-a-kind) memory card (VMU)

The VMU was so unique because not only would it save your game progress, but it also had a little screen with mini games inside – Sort of like a console in a console.

The controller well in hand, but it had one flaw. Because the VMU and “Rumble Pack” slots were located on the top, the cable used to connect it to the console came out from the bottom. This design would have made the controller uncomfortable to use, Sega thought about the user and added a little clip on the bottom back so the cable could be folded up and redirected out the back of the controller.

The Dreamcast was one of the first controllers to include a D-Pad and joystick. The joystick was probably influenced by arcade controls considering that the majority of games were originally released in the arcade.

Some games could use either the joystick or D-Pad as navigation, but unlike modern 3D games today which use 2 joysticks to move a player around (one for back / forward and one for upper body movement) the Dreamcast had to come up with creative ways to utilize only one joystick.

One game that comes to mind is MDK2 (don’t worry if you haven’t heard of it, it wasn’t very popular). The game used the joystick to move the upper body and the actual buttons to strife left and right and move back and forward. This meant that jump and shoot would have to be done using the triggers.

These unconventional controls solved a problem, but in my opinion degraded the overall user experience because it felt like I had to learn how to walk anytime I play a different game

UX then and now

Like all current-gen systems, Sega Dreamcast featured a “Dashboard” like interface, but it wasn’t used to launch a game, or shut down the machine.

Every time I was ready to stop playing, I wanted to hit a “home” button, or “put the system to sleep” – standard practice with modern consoles like the Nintendo Switch or PS4. Is this a result of “learned “?

Even the games themselves offered strange UI elements. In most the menus would visually represent components of the system – namely the VMU. In addition, since most of the games were pulled from the arcade, UI elements like a flashing “Press Start Button” in the top corners would always be visible. This is a UX element that I felt fell short. On home console, the relentless flashing was more of a distraction than anything and no longer relevant.

Today, the UI of a video game’s menu screens are much more immersive. They are less obvious that you are playing a physical and more about the gameplay itself. This could also be telling of the times. Old gamers grew up on the dawn of video games. Perhaps Sega had to be extra obvious because, literal references, the user would be left confused.

I often look to video games for UI and UX inspiration. I feel that looking at how one industry shapes experiences for its user based on the technologies available, you can apply similar practices to any field.

UX isn’t a single mould that every project fits into. It is the practice of manipulating and crafting elements to enhance the overall user experience.

So before I say farewell to one of my consoles, I would just like to acknowledge the hardware and software Sega produced and how they created a decent UX – relative to its time. 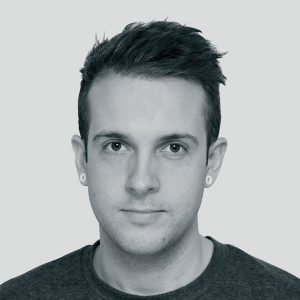 Lee Travaglini"Nothing is impossible, only improbable"

Lee Travaglini is the co-owner of Good Lookin Kids Inc. As a web designer his specialties focus on interactive design, including: IA, UI, UX, WordPress theme development and HTML5 game design and development. He also has extensive experience as a web developer using HTML5, CSS3 (adaptive CSS) and has a familiarity with jQuery (Javascript) and PHP.

With over nine years experience in the Interactive Design industry Lee has developed a strong understanding of the language possibilities and limitations that exist within each interactive design project. This understanding has sharpened his ability to adapt to different design styles and practices on a consistent basis.

Being an entrepreneur and a creator Lee is always looking to expand his abilities and is always wiling to try new creative outlets.